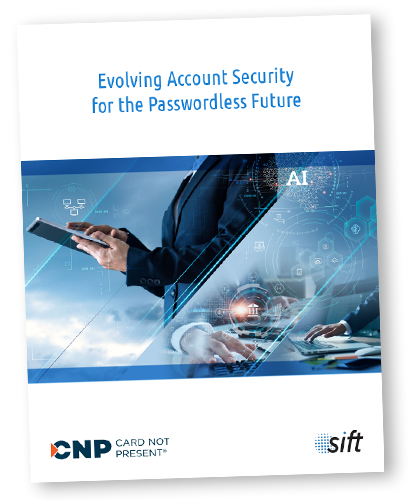 A new e-book from Sift and Card Not Present details how data breaches, social engineering, automated attacks and poor password hygiene by users have combined to make ATO—which has grown more than 300% between 2019 and 2021—perhaps the most pernicious fraud problem merchants face. It also details the technologies and strategies that can provide merchants with the best way to defend their biggest challenge. 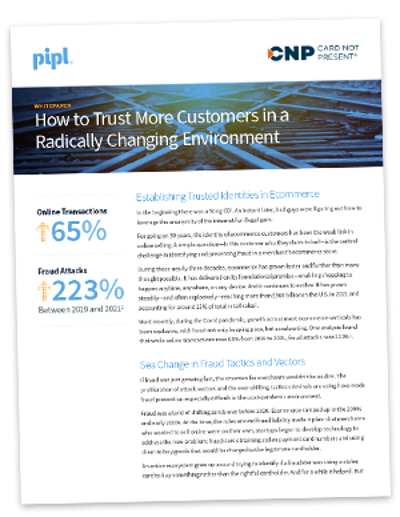 How to Trust More Customers in a Radically Changing Environment

For going on 30 years, a simple question—Is this customer who they claim to be?—has been the central challenge in identifying and preventing fraud in a merchant’s e-commerce store.

However, the proliferation of attack vectors and the ever-shifting tactics criminals are using have made fraud prevention especially difficult in the post-pandemic environment. 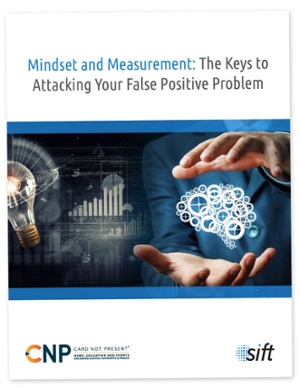 Mindset and Measurement: The Keys to Attacking Your False Positive Problem

“No.” It’s a tough word to hear. Especially for online consumers. They searched for an item, found exactly what they wanted on your site, entered their card number, and then? Denied. Their credit is good and they’ve always paid their bills on time. Confusion gives way to frustration and perhaps even anger. Why? You’ve unjustly accused them of stealing—you’ve insulted them. Get our latest white paper to learn how to better manage your insult rate and stop losing customers for life.

Bot and ATO Attacks: How They're Related and What You Can Do

There are faceless armies of robots arrayed against you. They are legion, they are tireless and, if they overwhelm your defenses, they can be lethal—to your business. And, while account takeover (ATO) fraud used to concern mainly bankers and insurance companies, the range of online accounts being illegally accessed and monetized is exploding with over 72% growth in ATO fraud losses from 2018 to 2019—and it's only getting worse.  Get our latest white paper, Bot and ATO Attacks: How They're Related and What You Can Do to avoid becoming another victim. 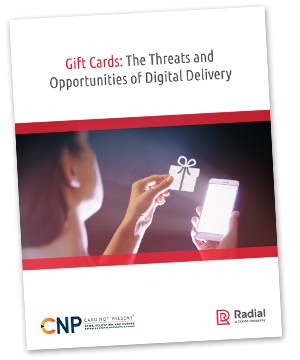 Gift Cards: The Threats and Opportunities of Digital Delivery

While digital gift cards are popular and lucrative for retailers, many merchants are losing millions every year to digital gift card scams. In fact, fraud attack rates on digital gift cards range between 17% and 28% depending on the merchant vertical. Get our latest white paper, Gift Cards: The Threats and Opportunities of Digital Delivery to avoid becoming another victim. 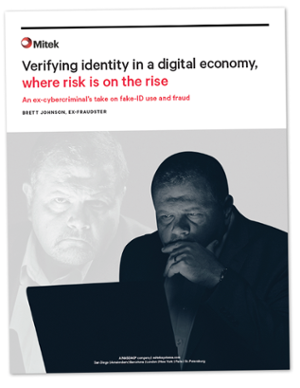 Verifying identity in a digital economy, where risk is on the rise 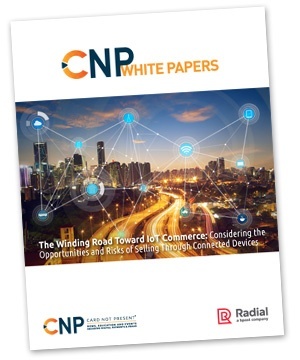 The Winding Road Toward IoT Commerce: Considering the Opportunities and Risks of Selling Through Connected Devices

The Internet of Things (IoT) consists of billions of connected devices—a number that will quickly accelerate—enabling rich, frictionless shopping experiences. But, while plenty of innovators are thinking about, and working on how to deliver those experiences, experts say relatively few are thinking about the associated risks. Get our white paper to learn what IoT commerce will do to data creation and storage requirements, how bots and botnets can turn our devices against us, which vulnerabilities specifically affect digital goods sellers and what this all means to merchants.

Bots are able to test hundreds of millions of username/password combinations stolen in data breaches across the Internet at scale, yielding a significant number of valid login credentials fraudsters can then use to take over accounts, becoming the most dangerous there is: criminals with bad intentions masquerading as legitimate users. Get this white paper to learn how fraud professionals can benefit from upstream solutions that detect and mitigate bot attacks, resulting in less ATO.

The number and variety of online accounts that contain value or to which consumers are attaching payment credentials has proliferated significantly, and all of them are currently secured with passwords that consumers reuse frequently, opening a vulnerability that is leveraged by stolen data. Get this white paper to understand the best way to attack ATO fraudsters. And, in a merchant case study, find out how implementing technology developed specifically to identify account takeovers measures can enhance the performance of your overall fraud detection and prevention.

False Positives: The Monster That’s Really Killing You and How to Survive

False positives are a bogeyman that fraud professionals exist. Intuitively, merchants understand that delaying, declining or canceling an order can result in the immediate loss of the sale in question and, more importantly, subsequent sales to a customer who, out of frustration, turns to a competitor—maybe for life. Get this white paper to uncover the real financial impact of false positives and why it’s an aspect of fraud prevention that is too often overlooked.

From Universal Identifier to Fraud Buster

Why a former hacker and card-not-present fraud pioneer think email risk assessment could be the most important weapon in your antifraud arsenal? Because it's an identifying piece of information that accompanies every online transaction. While fraudsters may try to adapt, to cash out they must ultimately steal or create an email address. Get this white paper to find out how you can put the email address to use to prevent fraud and approve more transactions.

Online fraud is exploding and, at the moment, account takeover (ATO) is a major culprit. Hackers are stealing username/password combos in droves—information that consumers are using multiple times, compromising their own identities and giving fraudsters the tools they need to operate under the guise of a trusted customer. Get our white paper to learn how to detect and prevent ATO fraud by fraudsters who utilize stolen , bots and your employees against you.

Has Your Fraud Team Hit The Breaking Point

Most fraud teams begin with one person responding to customers who are calling because they saw an unfamiliar charge on their credit card bill. Or, maybe a company is experiencing chargebacks for the first time and one person is tasked to learn about the issue. In any event, for small merchants, the process is intensely manual. As a company grows, it may add a person or two, but merchants can gain substantial size without significantly altering the way they fight fraud. This can result in a personal cost for the employees. Get this white paper to learn how to manage growth and fraud prevention in an 'always on' environment.

Understand the e-gift card landscape: Get this white paper to understand actionable recommendations that will mitigate your risk in a channel where fraud is taking an increasingly significant bite out of revenue, examine the full scope of gift card fraud and learn how to identify and prevent fraud schemes affecting open-loop, closed-loop and e-gift cards while maintaining a healthy sales flow.

As veritable oceans of stolen usernames and passwords become available for sale and mobile develops into the preferred method of accessing the Internet, e-commerce businesses large and small are reporting significant increases in a new method of attack. Account takeover and account creation fraud are on the rise. Get this white paper to better understand account takeover fraud and the options available to protect yourself and your customers from this new scourge.

How a merchant chooses to present itself to consumers through its Website in another country will contribute mightily to the success that merchant enjoys in that part of the world. Another factor that varies, naturally, from region to region around the world is currency. Offering products and services in a currency a consumer is comfortable with is vital, but comes with pitfalls. Get this white paper to understand how to manage multiple conversion options to optimize cross-border e-commerce.

Today, customers expect their digital experience to be faster, more convenient and more secure than ever before. This is becoming even more evident in the financial services industry. Get our white paper to learn the 5 key considerations to align your payment security to your digital business strategy and help build a secure e-commerce strategy centered on customer value, while also facilitating a broader digital business transformation plan focused on competitive advantage.

Card Not Present®, CNP SummitTM, The CNP Report® is a registered trademark of RELX Inc. | cardnotpresent.com